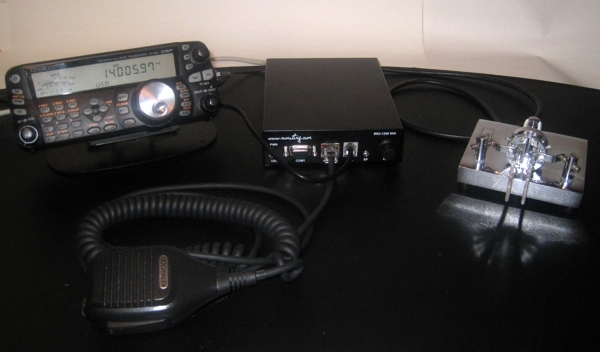 From v 1.44 the support for CW-operation in the system is considerable improved.

We have now implemented a CW keyer in the Remoterig software to make CW operation possible even with longer Internet latencys and lot of Jitter. Earlier we where depending on using the Sidetone from the radio when operating CW. It was not very easy for the brain to handle the delayed sidetone
if the Internet latency was more than maybe 20-30 ms. With the keyer built in to the Remoterig box that problem is solved when the sidetone is generated locally in the box.

Besides the local sidetone there is also a function which mutes the audio from the radio x ms after the dot or dash is sent (lf delay ms). This means that the sidetone generated from the radio will automatically be muted. Even if you can disable the sidetone in the radio there can be annoying clicks or other sounds that can be convenient to mute. The delay can be adjusted depending on the latency. A good start value is the same as the ping time between control and radio QTH.

Another important unique feature is the CW-handler which is kind of adjustable Jitterbuffer for the the CW keyer at the radio end. This means that if you have a Internet connection where the latency is not constant, you can set a delay (in ms) before the keying of the radio is started. In this way the CW-keyer can reconstruct the transmission on the fly before it is sent. In this way the system will be much more tolerant against varying latencys (Jitter). It’s the “key delay ms” in the Keyer Settings page”. Longer delays gives
higher tolerance against jitter but the delay will also increase. Even if you have a good connection you could try with a low value. Remember that when you increase this value you must increase the “lf delay ms” value also with the same value if its used

The function is available both in the RRC-1258MkII and in RRC-1258. In the earlier version you must add a potentiometer.

and here is the same transmission with the jitter correction activated ( “key delay ms” set to 50 ms).

The CW keyer settings is done on the “Keyer Settings” page. The parameters are also described on the Common configs page.

Connect the CW-paddle to the PAD jack on the back of the RRC-1258MkII. Pin 1 and 2 (8=GND) in the I/O jack is connected in parallel with the PAD jack for backwards compatibility with RRC-1258.

The output from the CW-keyer is easiest available at the PAD Jack (Radio RRC). Use a standard 3.5 mm stereo plug. both tip and ring is keyed. For backward compatibility the keying signal is also available in the I/O jack on the back of the Radio-RRC. Pin 5 is grounded by a FET when keyed. Pin 8 is GND. I both cases the keying is done by a FET-transistor (max 15V 200mA).

CW-keying from a PC or a straight key

If you want to change simultaneously between paddles an PC/straight key connect the PC/straight key to pin 4 in the I/O jack at the back of the RRC (8=GND). The input should be grounded for keying. When the CW-keyer is activated the PC input works in parallel with the keyer so you can shift simultaneous between PC-keying and the built in keyer. Both the sidetone and the unique CW-handler works both with the paddles and the PC/straight key inputs.  Attention! The Keyer input described above can not be connected direct to the PC, it’s a generic input which can be used for a Straight key or what ever. If you want to connect to a PC you need a interface, see down below

Down below is a schematic describing how a interface to the PC can be done. There are lot of different solutions on the Internet, but this is very simple and can be implemented in the D-sub housing. No values are critical, just use what you have in the junkbox.